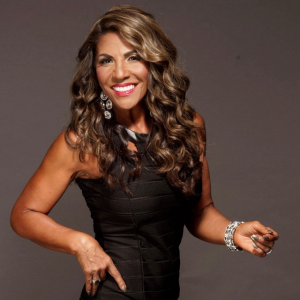 Evelyn is the Owner of Aging Evolution, LLC and is the embodiment of the company’s motto “Its never too late to be great”. She joined a gym for the first time in her mid fifties after she was diagnosed with Thyroid Cancer. She credits her diagnoses for saving her life and eventually leading her to pursue a career in the fitness industry. Evelyn continuously strives to defy her age and refuses to put limits on what is possible. Evelyn has written several articles on fitness and has also had her transition from business executive to a career in the fitness industry published online and in fitness magazines. Her story has also been aired on network television. In addition to running the company and giving motivational speeches, Evelyn is a fitness model. She has been featured in various fitness commercials and photo shoots advertising supplements, skincare products and women’s activewear.

Defying Age from the Boardroom to the Stage

I retired from a career in Corporate America that spanned 35 years. My perception of a life of leisure doing whatever I wanted was suddenly shattered by a diagnosis of cancer. This is my story of how I fought back to get healthy by charting a new career path in the fitness industry. This is my personal fight against ageist stereotypes and negative perceptions of aging to become a Figure Competitor on the verge of obtaining Professional Status (Pro Card). Defying my age to be the best possible me.